The Battle of Kettle Creek

One of the most important battles of the American Revolutionary War to be fought in Georgia occurred in Wilkes
County, some 12 miles from present-day Washington, Georgia. Here on February 14, 1779, a force of 400
patriots, in a surprise attack, defeated a force of Loyalists twice their number.

In October 1777 the Battle of Saratoga changed the direction of the Revolutionary War in the northern colonies. The American Revolution became a stalemate. As a result Lord Germain devised the "Southern Strategy" to control the colonies of Georgia, Virginia and the Carolinas.   This campaign to pacify the South and separate it from the Middle and Northern rebellious colonies began with the invasion of Georgia in 1778.

Savannah, Georgia was  captured by the British on December 29, 1778,  Southern Loyalists welcomed the British arrival, while Southern patriots began to prepare for battle. Lieutenant Colonel Archibald Campbell, captured Savannah for the British with 3,500 men, soon came under the command of Brigadier General Augustine Prevost. Savannah had been defended by the American General Andrew Williamson from South Carolina, but he withdrew from the city when Campbell approached, fighting a rear-guard action with his roughly 1,000 Georgian and South Carolinian militia men.

The morning of Sunday, February 14 (St. Valentine's Day) 1779, Colonel James Boyd and his roughly 650 British Loyalists recruited from North and South Carolina broke camp and continued towards their rendezvous with 80 Tory (British Loyalists) horsemen under Captain John Hamilton, one of the most prominent Tories of the American Revolution, who they believed were waiting at Little River, not far away. Boyd was apparently unaware the men he was to rendezvous with had already retreated to the British Army. 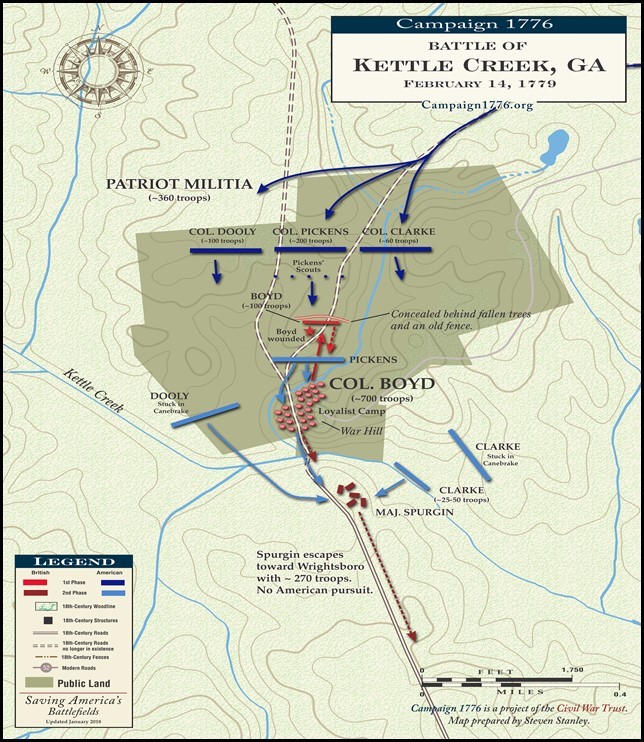 At 10 A.M., the Loyalists hoisted their flags and beat their drums for the first time since they had entered Georgia. Hearing their drums, Colonel Andrew Pickens (later a U.S. Congressman), Col. John Dooly and Lt. Col. Elijah Clarke ordered their 400 patriot frontiersmen to "pick and prime" their weapons, which they checked, and then ordered those who had food to share it. Captain James McCall was sent forward to reconnoiter Boyd's movements. Boyd and his Loyalists marched two miles further and halted on the north side of Kettle Creek, where some cows had been found for food. Not suspecting any danger, the Loyalists left their horses to graze and began butchering the cattle. Pickens, learning of the Loyalists' actions from McCall, who had come within view of the Loyalists without being detected, ordered an attack. His order of battle, planned that morning, would see Lt. Col. Elijah Clarke, commander of one wing of about 50 men, crossing the creek to attack the Loyalists on the left, while Col. Dooley would do the same on the right with another 100 men. Pickens, who would make the attack from the center with the remaining men, was preceded by an advanced group 150 yards in front of him which had orders not to fire on the enemy. Pickens plan, had it been executed, would have surrounded the Loyalists and attacked them by surprise from three sides. However, the plan failed.

Pickens' advance guard was extremely close to Boyd's sentries before their impatience got the best of them and
they began firing at the enemy sentries, warning the Loyalists. Colonel James Boyd advanced with roughly 100
Loyalists. Climbing a hill that was directly in Pickens' path and lying down behind an old fence and some fallen
trees, Boyd ambushed Pickens and his men when they were within 30 yards of his position. Some of Pickens's
men were killed and wounded as the battle seemed to go in the Loyalists' favor. Three of the Patriots were
separated from Clarke's forces and found themselves near Boyd's Loyalists. They fired upon Colonel Boyd. As
Boyd fell, mortally wounded, the Loyalists panicked and ran. Pickens and his men pursued the fleeing Loyalists
to their main group and captured the dying Boyd. Dooly and Clarke, meanwhile, did not cross the creek as
ordered, but were stuck in the cane swamps on either side of the Loyalists. When the three wings of Pickens'
attack finally reached the main body of Loyalists, many of them had already crossed the creek and were
reforming on a hill to their right. Lt. Col. Clarke ordered a charge across the creek to attack the Loyalists forces,
but as he did so, his horse was shot from under him. He quickly remounted and crossed the creek at a ford that
he found when he had fallen from his horse. However, no more than a quarter of his men heard him and
followed. On the other side of the creek many more Loyalists were reforming on one side of the hill under
Loyalist Major William Spurgin when Clarke attacked from the other side. Clarke, now reinforced by Pickens' and
Dooly's men, who had crossed through his swamp, finally forced the Loyalists to retreat in confusion after a half­
hour struggle. The entire battle was less than two hours. Although accounts of the Loyalist causalities vary, only
270 of those roughly 700 men reached the British forces between Augusta and Savannah. In addition 600
horses and a great deal of baggage were captured at Kettle Creek and Carr's Fort, which had preceded Kettle
Creek. After the battle, Pickens met with Boyd, who was still conscious, but dying from his wounds. One account
states that Boyd gave Pickens a letter and some small items to send his wife. Boyd died early that evening.

The importance of the battle showed the determination of the Southern Patriots and was a reminder to the
Loyalist forces that they were not safe in the open country, away from the British bases and army. In many
ways the Revolutionary War was a civil war, with Loyalist militia forming whenever the British Army arrived in
force. Loyalist units were particularly active in fighting in the Middle and Southern colonies. While never a
majority of the colonial population, they consisted of a strong minority. After the Revolutionary war, an  estimated      20% of Loyalists moved to Canada, where they were compensated for their losses by the British
government.

The Kettle Creek battlefield, a wooded area, including "War Hill" is a 254 acre tract encircling a 500 foot high hill.
Upon the hill the War Department placed the Kettle Creek Monument in 1930. The Georgia Historical Commission placed  a historical markers in 1958 atop the hill and in 1962, 1973, and 1974 additional monuments were placed and some Revolutionary soldiers were recognized with cenotaphs atop the hill. The battlefield was listed in the National Register of Historic Places on June 26, 1975. In January 2021 the Kettle Creek Battlefield received affiliated status from the United States Department Interior  as part of the National Park Service.