244rd Anniversary of the Battle of Kettle Creek

In January 2021, due to the efforts of the Kettle Creek Battlefield Association and the sponsorship of U.S. Representative Jody Hice, the Kettle Creek Battlefield was awarded affiliated status by the U.S. National Park Service. This status recognizes the important contribution the battle made to the American Revolution. This pristine battlefield contains graves of 28 soldiers that are marked by white crosses where they fell. For those who wish to stamp their “Passport to Your National Parks Book”, the official cancellation stamp will be available at the trailhead kiosk at the foot of War Hill.

The Celebration of the Battle of Kettle Creek is recognized as a National Event Ceremony by the National Society Sons of the American Revolution, and this year the events will be attended by the President General, NSSAR. On Friday, the GASSAR Color Guard will present the Colors at a 1:30 p.m. ceremony in Elijah Clarke State Park, and the GASSAR Militia will salute Col. Clarke with a musket volley. Also, on

Friday, the KCBA will conduct tours of the Kettle Creek Battlefield beginning at 11 a.m. and continuing throughout the day. All the other usual activities will take place except the annual KCBA dinner meeting at the Pope Center which has been cancelled due to the Covid-19 virus. 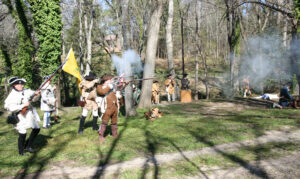 Saturday will be full of celebratory events beginning with the raising of the Revolutionary War Colors at 9:50 a.m. and a Patriot Salute at 10:10 on the Washington town square. Members of the GASSAR Color Guard and the Georgia Society Daughters of the American Revolution will portray American Revolution characters. Throughout the morning, visitors may talk to and take pictures with these living history performers. Colonial exhibits and demonstrations may be enjoyed in a building just off the town square. Everyone is encouraged to take part in the 10:30 parade, and participants will assemble behind the Washington Courthouse at 10 a.m. At 11 a.m. an exciting battle re-enactment will take place behind the courthouse. 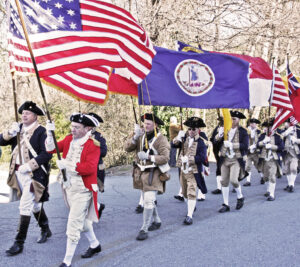 At 1 p.m. the celebration will move to the Kettle Creek Battlefield for the 2:30 wreath laying ceremony. The GASSAR Color Guard will present the Colors and the GASSAR Militia will conduct a musket salute to the patriots who fought at the historic battle. A wreath-laying ceremony will be held for all who wish to honor the Patriots who fought at the Battle of Kettle Creek, and the Georgia Society Children of the American Revolution will conduct the 13 Flag Ceremony. 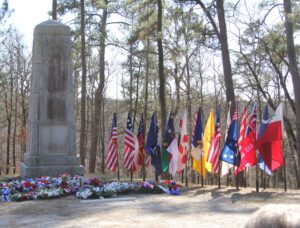 On Sunday, the annual Colonial Worship Service will be at 9 a.m. at the Episcopal Church of the Mediator in Washington. This service is open to the public, and all are invited to attend.

If you would like more information on Revolutionary Day’s please visit www.kettlecreekbattlefield.com or www.gasocietysar.org